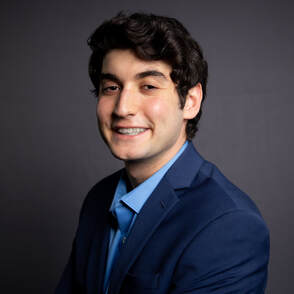 Judah Brody was born in Goleta, California, right outside sunny Santa Barbara. His freshman year of high school he joined DPNews at Dos Pueblos High, where he bounced around as an anchor, reporter, cameraman, editor and did other various jobs. His junior year he founded the DPNews live production division where he managed and taught his fellow students how to live stream sports. Baseball is his favorite sport to commentate and watch. He skateboards, ran track and field, was the president of the Jewish Student Union at DPHS and was clarinet section leader with the Dos Pueblos Marching Chargers.

He has been creating videos since he was little,  using Adobe Premiere since 4th Grade to make his sister's Bat Mitzvah montage,  his science project, or whatever this is. Here is one of his first journalistically-minded videos. He runs a production company that produces news packages, sports live-streams, professional edits and recordings for local businesses, comedy sketches and has worked on short films.
​
His junior year he was a news editor for DPNews where he worked with other leaders of the program to elevate it to new levels and consistently provide top quality content to Dos Pueblos. In DPNews he has learned countless workplace and media skills, and founded the live production division his sophomore year, kicking off his sportscasting career by broadcasting the division I CIF-SS baseball playoffs. Pieces of some broadcasts were used by Channel 3-KEYT and the LA Times encouraging him to broadcast more sports his junior year.

In March of 2019, he traveled to the Student Television Network convention for the third time, with DPNews. In Seattle he presented a professional session to hundreds of students and faculty of schools across the country. It was incredibly tough, but he pulled it off.

Late 2019, he became a sportswriter for SBCC's The Channels and Noozhawk. As he was writing for the publications, pandemic struck (guess which one!) and although his workload decreased, he got creative and produced original content during a scary time.

He traveled to Arizona State University in 2021 and majors in Sports Journalism at the Walter Cronkite Institute for Journalism and Mass Communication in Downtown Phoenix, Ariz. estimating to graduate in the Spring of 2024.
Contact Me